Images don’t happen they are created … 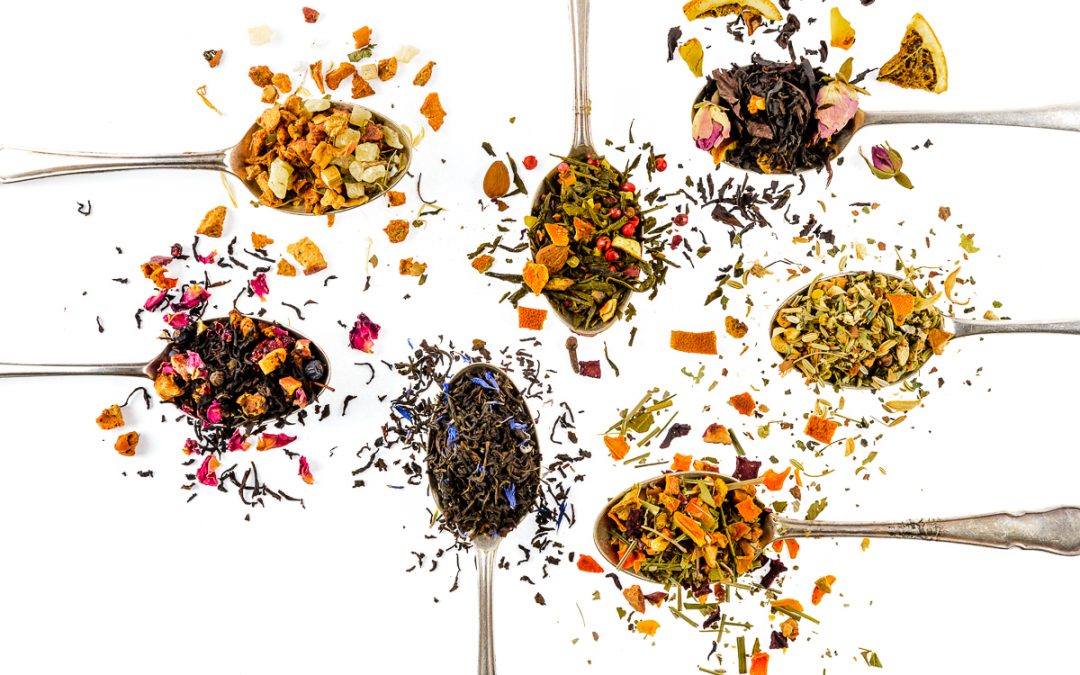 With that camera anyone could take a great shot!  Well no actually they couldn’t.  It’s great having good kit certainly and it helps but images don’t happen, they are created and it takes time.  I’m sure there’s a belief that you just quickly lay something out and hey presto it’s done but nothing could be further from the truth. Quite apart from the kit, there’s the knowledge of how to get the best from the kit and then there’s your experience of lighting, composition, styling, the subject matter itself and so much more and all of this goes into each and every shot taken in my studio.

Take this lovely image of tea I created very recently for The Tea Enthusiasts, it looks pretty simple doesn’t it?  Just chuck a few spoons down, sprinkle tea and you’re done.  Except like most things in life it’s just not that simple.

I’d had the idea for this image ever since Liza had first asked me to work with her and I knew exactly what I wanted to produce.

First of all I set up the studio with a white background and set up lighting including lighting from underneath to highlight the lovely teas and ensure a crisp white background.  Then it was time to find the props.

Once I’d found the spoons I was looking for (no mean feat currently as there’s so much in the studio) I had to lay them out and couldn’t find the glue gun to anchor them (until after the shoot!), so that meant I had to be uber careful, the last thing you want is for the tea to fall in the wrong place and have to start again, 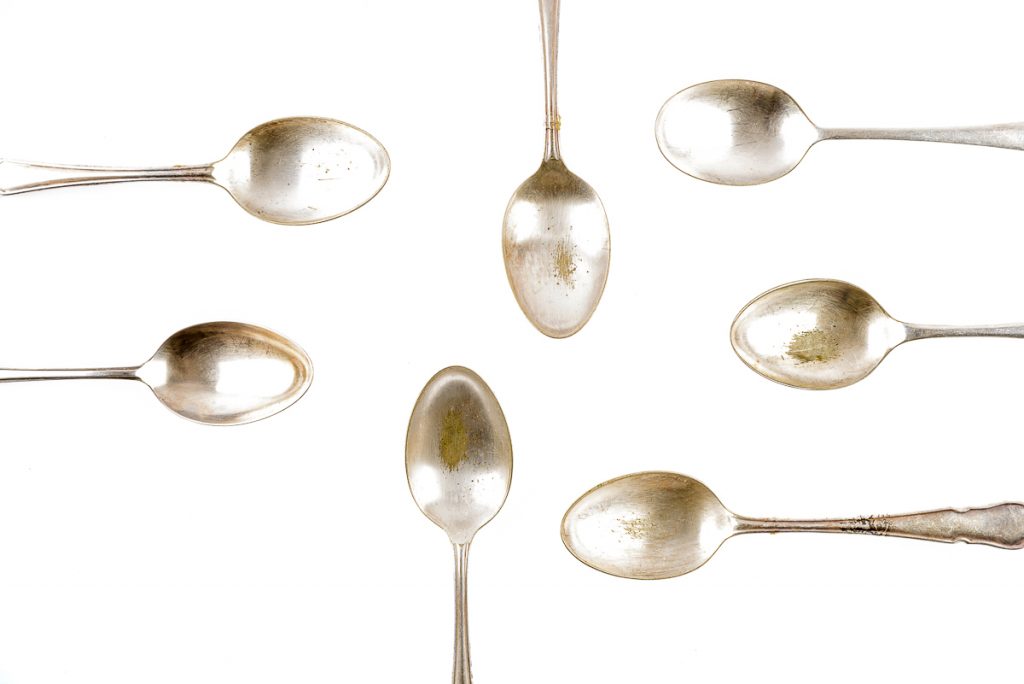 Flat lay teaspoons laid out ready for the addition of tea. It takes time to get the layout exactly the way you want it.

Before adding the tea I took some shots of the spoons to ensure they were in the right place and that I had the light right. It was no good getting it all set up only to find that the spoons weren’t in the right place and had to be moved.  That means setting up the camera in the right position, tethering to the laptop, as I like to ensure everything is how I want it at the time of the shoot.  What looks straight to the human eye often isn’t once you view it on screen and again once its set up it can be tricky to change without starting over.  So the spoons got moved around a bit until I was happy with the layout and the lighting was adjusted.
Then it was time to add the tea, which of course didn’t always go where you wanted it too.

Each spoon was loaded up one by one … 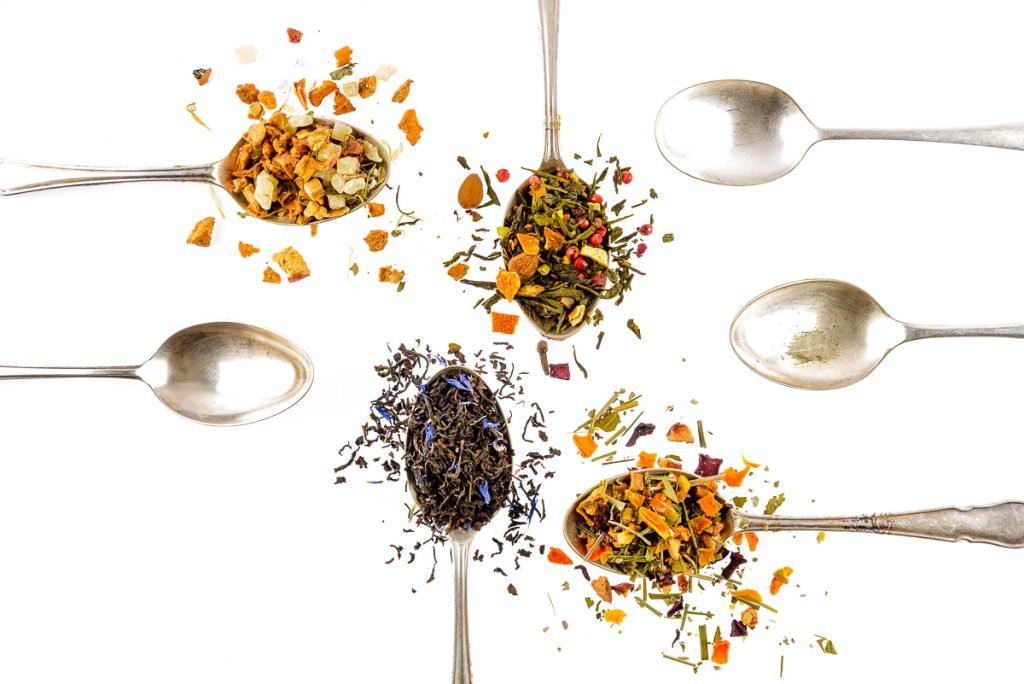 Building up the image, step by step and checking each step as you go with a shot taken and inspected close up.

Luckily I’ve plenty of brushes and tweezers to hand to help sort that out. It’s really hard to do that and not move the spoons, hence wanting the glue gun. I also had to think carefully about which teas to use, and where to put them so that the colours all worked the way I wanted them too. Here the last thing you want is to have it all laid out and realise you need to change it up …

You want a sense of the tea, but not too much and you want it even, in amounts and attractive to the eye.  So a little more tea here, a little less there, let’s add a couple of more pieces of one tea here, oh look those two rosebuds are way too close, let’s move them and so it goes on until I’m 100% happy with the composition.  It can take a while!  By the time I got the shot you see here I’d taken a good number of images, it’s rarely the first image that gets used for a shot, though that does happen, it very much depends on the subject matter.

Finally they were all in place and I could take the shot. I think its interesting to see that something so simple can take such a time to create, things are never quite what they seem though are they?

Then of course it all has to be cleared away and the studio made ready for the next shot.  Once the shoot is done the images are backed up and added to the workflow for editing.  And yes there’s almost always some editing.  The process here is quite stringent and each image is checked over carefully at 100% to check for dust and marks that the human eye may have missed – the camera never misses a thing and things our eyes wouldn’t notice in real life really stand out when the camera finds them.  Colours are checked adjusted if necessary the images are key-worded which helps them to be located in a huge library of images but can also be useful for search engines and finally when they’ve been checked again they are saved out in the right format before being uploaded to a client gallery.

So far from being a fast process with a quick turnaround, great images don’t happen, but are very much created.  I absolutely love creating beautiful images for my clients but there’s no such thing as quick.  It’s like project management where you can have cheap, good or fast but not all three!  The same applies to photography.  If you’d like to know more about shoot preparation have a look here.